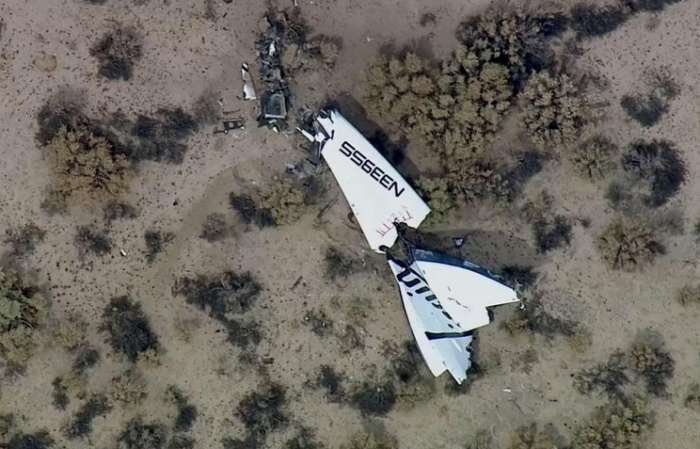 The suborbital tourist plane SpaceShipTwo crashed in Mojave Desert, California, on Friday after exploding during a test flight, US media said.
The explosion occurred seconds after the experimental vehicle separated from the mothership White Knight and its own jet engine was turned on.
One of the two SpaceShipTwo pilots died, while the other ejected himself. He was seriously injured and taken to hospital. The cause of the crash was not immediately known.
According to a post placed on Twitter by the designer company, Virgin Galactic, the spaceship developed serious problems during the test flight.
Virgin Galactic belongs to British multi-millionaire Richard Branson, who said he was flying to the site of the crash at once.
The spaceship’s debris have been spotted some 150 kilometres north of Los Angeles, near the launch site from where it had taken off.
SpaceShipTwo is being developed exclusively for space tourism. According to original estimates the cost of one two-hour-long journey offering the travellers a chance to feel the effects of zero gravity and enjoy views of the globe from an altitude of 100 kilometres would be about 250,000 dollars. The spacecraft was designed to carry two pilots and six passengers. More than 800 celebrities, including actors Tom Hanks and Angelina Jolie have already expressed the wish to make a trip to space. Branson said he himself and his two children - daughter Holly and son Sam - were to be the first to become SpaceShipTwo passengers.
In April 2013 SpaceShipTwo made a successful maiden flight over the California desert to have broken the sound barrier.
The loss of SpaceShipTwo was this week’s second crash of a space vehicle in the United States. On Tuesday, the Antares rocket exploded immediately after liftoff from the insular Wallops Flight Facility in the Atlantic, near Virginia. It was expected to put in orbit the Cygnus cargo vehicle carrying supplies to the International Space Station. Both the rocket and cargo craft were designed and manufactured by the private US company Orbital Sciences.

Այս թեմայով The information circulated in the Armenian and foreign mass media that on October 8 the parties firmly agreed to held a ceasefire is not true. President Sarkissian gave an interview to Chinese Caixin Media. Turkish pro­-governmental mass media spread disinformation that allegedly Armenians are to blame for tension in the country Azerbaijan’s Ministry of Foreign Affairs threatens Russian mass media Armenia’s delegation was in center of attention of mass media in European Games
Բաժանորդագրվեք մեր YouTube ալիքին
Լրահոս
8 Feb