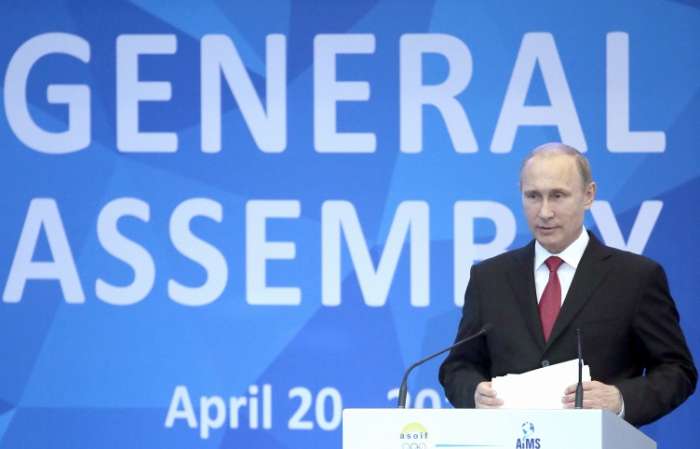 Russia knows how to keep its word and will host the 2018 World Cup as well as other global sports tournaments in the coming years at the highest level possible, Russian President Vladimir Putin said on Monday.
"Of course we have grand work ahead of us," Putin said addressing the participants of the SportAccord Convention in Russia’s Black Sea resort city of Sochi.
"But considering our previous experience and the fact that we always keep our word, we will undoubtedly host all these large-scale global [sports] events at the highest and most decent level," the Russian president said.
In February and March 2014 Russia’s Black Sea resort city of Sochi hosted Winter Olympic and Paralympic Games, which, according to international sports officials, athletes and visitors, were organized at the highest level possible and provided up-to-date infrastructure at all levels as well as security for all participants in the event.
The Russian president said among the global sports events to be hosted by Russia in the nearest future are the 16th FINA World Championships, to be held in Kazan this year between July 24 and August 9, the 2016 IIHF World Championship, the 2017 FIFA Confederations Cup, the 2018 FIFA World Cup and the 2019 Winter Universiade in Krasnoyarsk.
SportAccord Convention is a 6-day annual gathering of leading representatives from international sport. It encompasses the Congress and General Assemblies of three associations whose members consist of 109 International Sports Federations (IFs) and Associate Members.

Last month FIFA President Sepp Blatter, who is also attending the current SportAccord Convention in Sochi, slammed international politicians for their calls to boycott the 2018 World Cup in Russia saying football was "a symbol of unity."
On March 16 Ukrainian President Petro Poroshenko called on his country's allies to consider boycotting the 2018 FIFA World Cup in Russia over the crisis in Ukraine’s southeast.
Calls to strip Russia of the right to host the World Cup in 2018 as a form of penalty regarding Moscow’s stance on the developments in neighboring Ukraine were voiced repeatedly last year on behalf Western politicians as well.
2018 FIFA World Cup Preliminary Draw
Despite the Western political calls to strip Russia of the right to host the 2018 World Cup the country is currently gearing up for the Preliminary Draw, which is the first major kick-off event ahead of the global tournament itself.
The draw for the 2018 FIFA World Cup Preliminary Competition will be held on July 25 in Russia’s second largest city of St. Petersburg with a total of 208 nations having signed up for the participation in the event.
It will be for the first time in the history of World Cups, when all national teams registered for the Preliminary Draw. Russia as the hosting nation automatically qualified for the championship and therefore is not taking part in the preliminary competition.

The first major kick-start event of the 2018 World Cup will be held at the historic Konstantinovsky Palace, a stronghold of Russia’s rich culture located on the Gulf of Finland’s stunning shoreline. It used to serve in the 18th century as one of the residences of Russia’s imperial family.
Russia won the bid to host the 2018 World Cup over four years ago in a tight race against the joint bid from England, Portugal and Spain and the joint bid on behalf of Belgium and the Netherlands.
Russia selected 11 host cities to be the venues for the matches of the 2018 World Cup and they are Moscow, St. Petersburg, Sochi, Kazan, Saransk, Kaliningrad, Volgograd, Rostov-on-Don, Nizhny Novgorod, Yekaterinburg and Samara.
The matches of the 2018 World Cup will be held between June 14 and July 15 at 12 stadiums located in the 11 mentioned above cities across Russia. Two of the stadiums are located in the Russian capital.