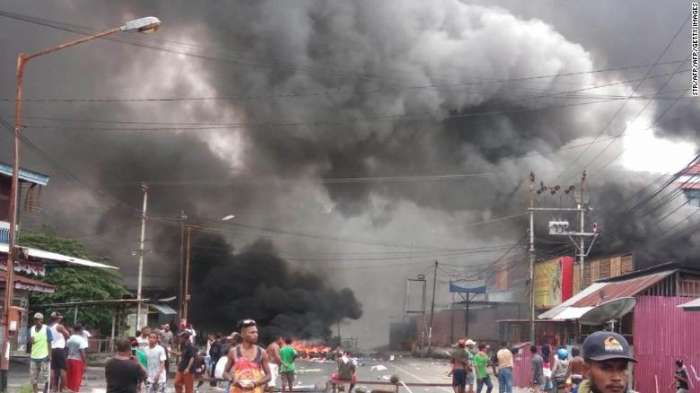 (CNN)Thousands of protesters in the provincial capital of Indonesia's West Papua have set fire to a local government building amid widespread demonstrations sparked by alleged police discrimination against Papuan students.

The Indonesian provinces of Papua and West Papua have for decades been wracked by a long-simmering and occasionally violent separatist movement, with flare-ups common.
On Monday morning, crowds marched through Manokwari, the capital of West Papua, setting fire to the parliament building, cars, and tree tires.
Videos on social media show the parliament building billowing black smoke, and deafening chants from large crowds on the streets -- a rare public protest in the highly militarized region. Footage shows protesters bearing signs that read, "Stop racism." Police in Manokwari responded to the protests Monday with tear gas.
"This is unpredictable -- the masses are so angry," said Veronica Koman, a human rights lawyer in Indonesia, adding that the protests were "triggered by the racist attacks."
The unrest first began on Saturday in Surabaya, on Indonesia's Java island, a national holiday marking Indonesian Independence from Dutch colonial rule. Papuan students were accused of throwing the Indonesian flag into a ditch, leading a clashes with a crowd of angry local residents, according to CNN affiliate CNN Indonesia.
Բաժանորդագրվեք մեր YouTube ալիքին
Լրահոս
27 Nov