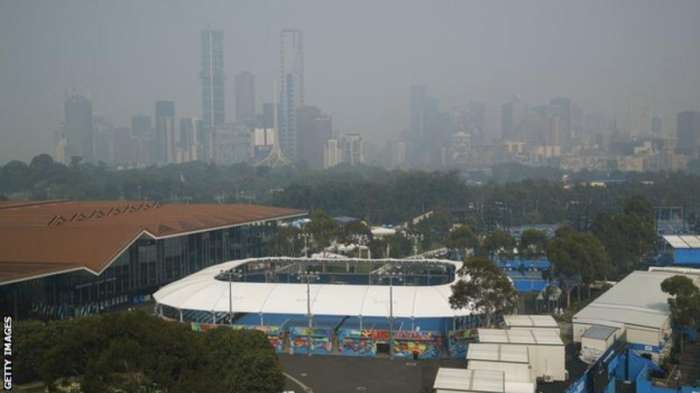 Australian Open organisers are confident the tournament will start and finish on time despite continuing health concerns over Melbourne's air quality from bushfires in the country.

Some players have complained about having to play qualifying matches in smoky conditions.

"There is a lot of speculation about the Australian Open not happening, or starting later," said tournament director Craig Tiley.

Slovenia's Dalila Jakupovic had to be helped off court when she retired from her qualifying match on Tuesday because of the "unhealthy" air quality.

British player Liam Broady said having to play his first-round qualifier on the same day "made his blood boil", adding he was "gasping for air" as he lost to Belarusian Ilya Ivashka.

People in Melbourne were advised to stay indoors and keep pets inside on Tuesday.

A number of players have also criticised the tournament for not postponing the matches, with American Noah Rubin saying he had "blood and black stuff" coming out of his nose following his match on Wednesday.

Tiley says he understands the anger of the players, adding he believes it stems from the confusion of seeing different measurements of air quality depending on the app or website they used.