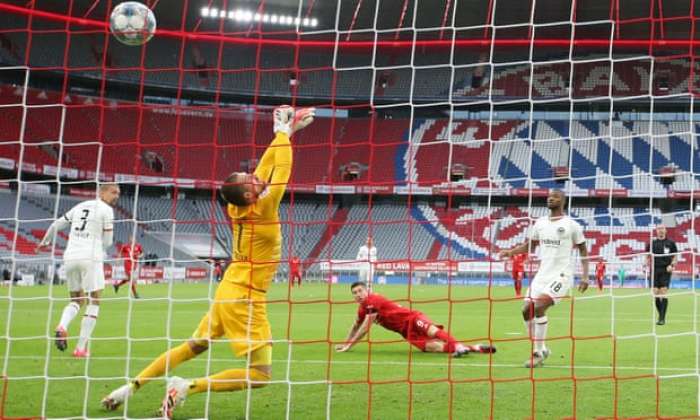 Bayern Munich refused to give up ground in the Bundesliga title race after surviving a second-half comeback to beat Eintracht Frankfurt 5-2. Earlier, the substitute Jadon Sancho helped Borussia Dortmund pressure the leaders with a 2-0 win at Wolfsburg. Dortmund now host Bayern on Tuesday and can cut their lead to one point, while Hansi Flick’s side chase an eighth successive championship, with victory in der Klassiker.

Goals from Leon Goretzka, Thomas Müller, Robert Lewandowski and Alphonso Davies did the damage for Bayern, along with a Martin Hinteregger own goal. But lax defending from set pieces allowed Hinteregger to score twice for Frankfurt in the space of four second-half minutes that briefly threatened to derail the procession.

“I was happy with the first half. We wanted to dominate and we did that,” Flick said. “At 3-0 maybe we were mentally already done with the game. Against Dortmund we want to keep a clean sheet.”