Paris Black Lives Matter protesters: 'Who protects us from the police?' 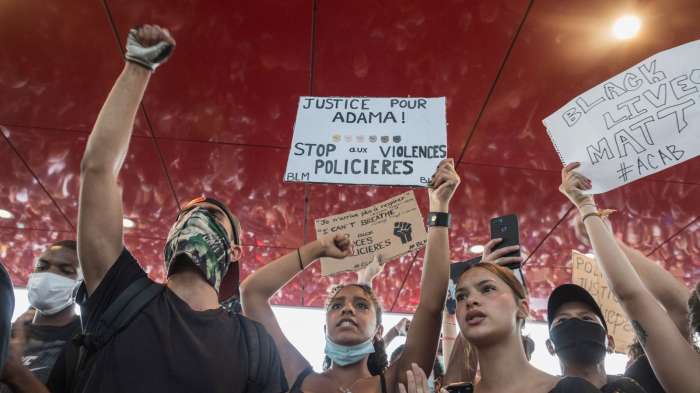 Paris is no stranger to demonstrations. The French capital has a long tradition of protest, of banner, flags, chants and crowds. But this one was different.

Often, Parisian protests are about party politics, or the economy. The last big violent demonstration here involved a blend of disaffected trade unionists, some angry Gilets Jaunes and a group of people who just wanted a clash with the police. Which they got.

That day, the tear gas was sprayed around and the police came under attack, before the violence stopped and the peaceful protest resumed. The tension, which reached a violent crescendo, fell away.

But this time, the tension lingers. Because the police weren't just monitoring this protest - but were also the focus of its anger.

As we watched the aftermath of clashes in Porte de Clichy, a sign caught my eye. It said "Qui nous protege de la police?" It translates, simply, as "who protects us from the police?" And it's a question that is now resonating in Europe, just as it reverberates in the United States.

In Paris, there is another echo to events in America. Four years ago, a young Frenchman called Adama Traore was arrested in Paris.

The police had actually been looking for his brother but, according to reports, Adama did not have his ID with him and tried to run away. Instead, he was arrested.

Somewhere along the line, in the next few hours, he died. The police say his death was due to a pre-existing health condition. His family say he was asphyxiated while being restrained by an overbearing police officer.

25.15:29Nagorno-Karabakh: The mystery of the missing church

2.19:41The Blessing and the handover of the Crosses of Ashot II the Iron under the sponsorship of Tovmasyan Foundation

26.11:13Artak Tovmasyan calls on the factions to start an impeachment process

18.13:50Artak Tovmasyan and his team of IT specialists introduced necessary steps for the further development of Armenia

11.16:32From the old players to a new "surprise". The political field is getting positioned ․ "Past"

1.15:17Peace through the eyes of a soldier: Tovmasyan Charity Foundation (video)

18.14:36Biden administration to have another American Armenian official

18.14:33Erdogan tries to break out of isolation, forging relations with EU