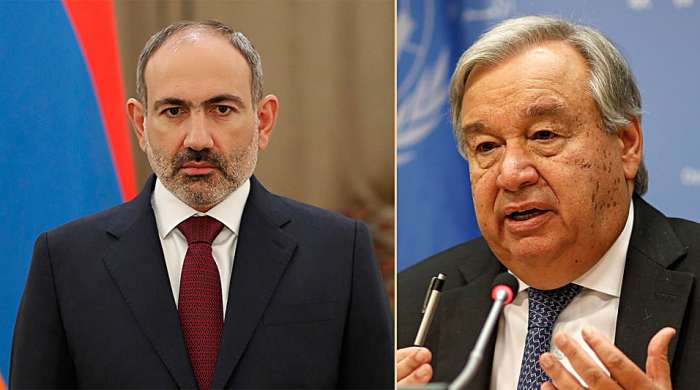 The Prime Minister referred to the situation on the Karabakh-Azerbaijani Line of Contact and stressed the fact of the war unleashed by Azerbaijan.

Nikol Pashinyan noted that in contrast to the previous escalations, this one is characterized by Turkey’s active and biased position and its direct destabilizing involvement in Azerbaijan’s actions.

The UN Secretary-General expressed deep concern over the current situation and the ongoing developments, stressing the need to resume the peace process in the OSCE Minsk Group format.

Այս թեմայով Prime Minister Nikol Pashinyan petitioned the president to posthumously award the title of National Hero to the Commander of the N military unit, Vahagn Asatryan. Prime Minister meets with representatives of extra-parliamentary political forces The borders of Artsakh have, therefore, become a civilizational frontline. Prime Minister Pashinyan briefs Hassan Rouhani on Turkey's involvement in hostilities Prime Minister: “The Government of Armenia and Corporación América go hand in hand, and this process should ultimately be crowned with the victory of economic revolution”
Բաժանորդագրվեք մեր YouTube ալիքին
Լրահոս
27 Jan