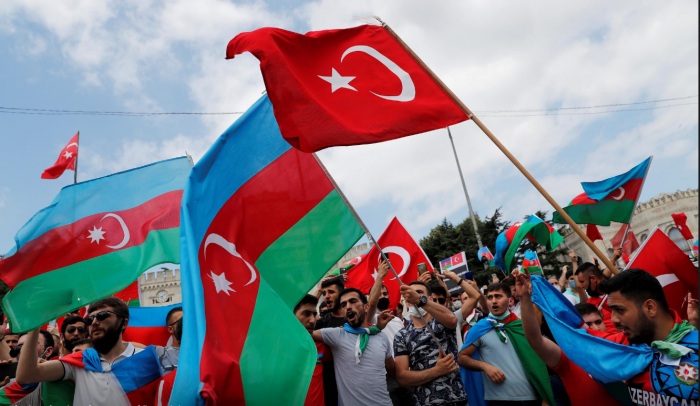 ISTANBUL (Reuters) - Turkey is sending Syrian rebel fighters to support Azerbaijan in its escalating conflict with neighbouring Armenia, two Syrian rebels have said, as Ankara pledges to step up backing for its majority-Muslim ally.

The clashes over the territory of Nagorno-Karabakh are the heaviest since 2016, with reports of dozens of deaths and hundreds wounded.

Armenia’s ambassador to Moscow said on Monday that Turkey had sent around 4,000 fighters from northern Syria to Azerbaijan and that they were fighting there, an assertion denied by an aide to Azerbaijan’s President Ilham Aliyev.

Armenia also said Turkish military experts were fighting alongside Azerbaijan in Nagorno-Karabakh, a mountainous breakaway region of Azerbaijan run by ethnic Armenians, and that Turkey had provided drones and warplanes.

Azerbaijan denied the reports. Turkey did not immediately comment, although senior officials including President Tayyip Erdogan, who has increasingly been flexing Turkey’s military muscle abroad, have promised support for Baku.

The two fighters, from Turkish-backed rebel groups in areas of northern Syria under Turkish control, said they were deploying to Azerbaijan in coordination with Ankara.

They declined to be named because of the sensitivity of the issue. Reuters could not independently verify their accounts.

“I didn’t want to go, but I don’t have any money. Life is very hard and poor,” said a fighter who had fought in Syria for Ahrar al-Sham, a group that Turkey has supported.

Both men said they had been told by their Syrian brigade commanders they would earn around $1,500 a month - a large wage for Syria, where the economy and currency have collapsed.

The fighter said he had arranged his assignment with an official from the Turkish-backed Syrian National Army (SNA) in Afrin, a region of northwest Syria seized by Turkey and its Syrian rebel allies two years ago.

A spokesman for the SNA, an umbrella group of Syrian rebel groups backed by Turkey, did not respond to a request for comment.

The other fighter, from the SNA-affiliated Jaish al-Nukhba militia, said he had been told nearly 1,000 Syrians were set to be deployed to Azerbaijan. Other rebels, who also declined to be named, gave figures of between 700 and 1,000.

The two men, who spoke to Reuters last week, said they expected to be despatched on Sept. 25, to guard facilities but not to fight. Reuters was not able to contact them on Monday to confirm their location.

Hikmat Hajiyev, a foreign policy aide to Azeri President Ilham Aliyev said it was “complete nonsense” to say Syrian fighters were coming to help his country: “Our armed forces have more than enough personnel and reserve forces.”

In recent years, Turkey has projected growing power abroad with incursions into neighbouring Syria and Iraq, and military support for the internationally recognised government in Libya.

Այս թեմայով Armenia PM congratulates Greece counterpart on 200th anniversary of liberation from Ottoman Turkey Armenian doctor joins leadership of Turkey ruling party Statement by the Foreign Ministry of Armenia regarding the deployment of foreign terrorist fighters in the region by Turkey and Azerbaijan The Syrian mercenary captured in Artsakh tells his story during the interrogation: his journey from being recruited, paid, getting instructions up to him regretting going the wrong path. Gentlemen statesmen, the time has come to sober up, unite, and act for the sake of the state. Artak Tovmasyan
Բաժանորդագրվեք մեր YouTube ալիքին
Լրահոս
8 Feb