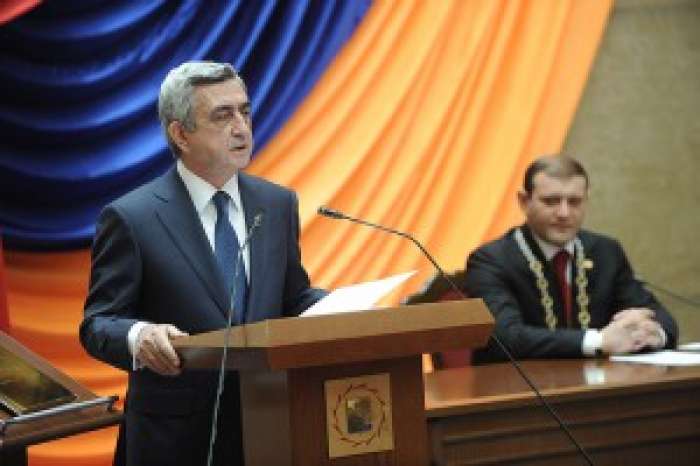 Our country is awakening from elections to elections. During a few days such things are being done, which are not done during a year. When RPA President Serzh Sargsyan speaks about the elections, especially, Yerevan municipal elections, and stresses that it is the nature of life, all the other parties' political approach appeares suddenly.

Let's start with the fact that the Republican Party is dictating the nature of elections, beginning from presidential elections. February 18th elections were helding political nature and to imagine that otherwise, would have been simply impossible, whereas last year's parliamentary elections come to prove that living is that tincture, with the help of which the Republican members formulate their victory, and that is guaranty of Serzh Sargsyan's words and thoughts, that Yerevan municipal elections will have "living" nature.

While the process of rapid growth of "apologists of change", full of populist statements, is blooming in Armenia, RPA is busy with turning Serzh Sargsyan's words into a very important axiom.

More specifically, the Republicans before elections, that is a month before, are already doing what they would have done long over the years. In particular, in this short period of time, more specifically during these two days, everyone, from District Head to local authorities in Yerevan's every district is busy with his work, and we can notice that they carry out their duties in a regular manner.

During only two days works on asphalt are carried out in Malatia-Sebastia community-from buildings' yards to the main streets, while Taron Margaryan all reign such things has not occured. Similar processes are also being occured in other communities, too.

Let's only remember that Taron Margaryan severe reprimanded the Director of Metro for illegal construction. This is just a game to advertise Taron Margaryan's drastic steps, in short, the most primitive PR. A striking evidence of this is this question: Whether the director of the Metro is not from this city and has thought that the building will remain unnoticed, here to say sinful naive.

So, these elections are already holding "living" nature- with the primitive factors of asphalt or being an author of 'conquest', which, however, it is a time for change, and "apologists of change" are only being "multiplied" without necessary activities.